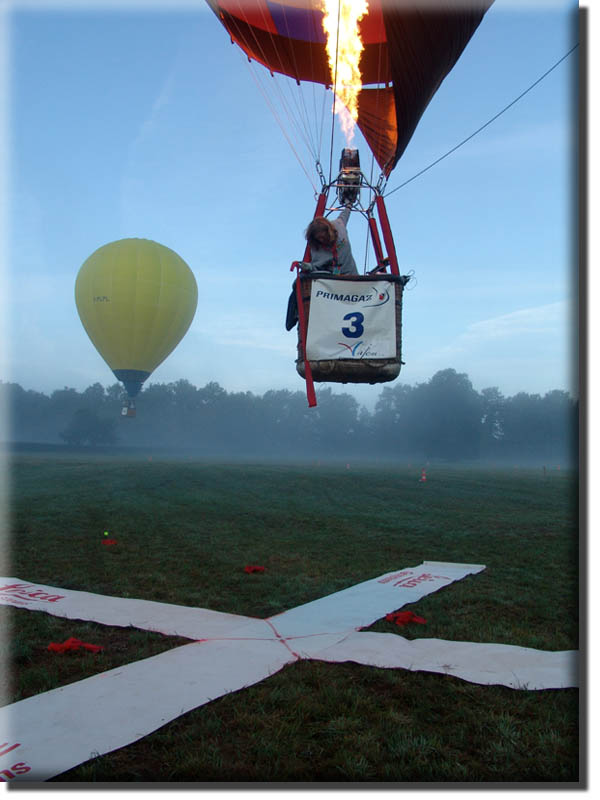 In competitions the tasks test the knowledge of the pilots. Balloons are non-motorized aircraft propelled solely by wind and air currents. Most people don't even understand how to control a hot air balloon ...

The order among the competitors is determined by how they can control the balloon so as to get as close as possible to a designated target or area from a given take-off location.

But how can the results of pilots be compared? Click and learn more about this! 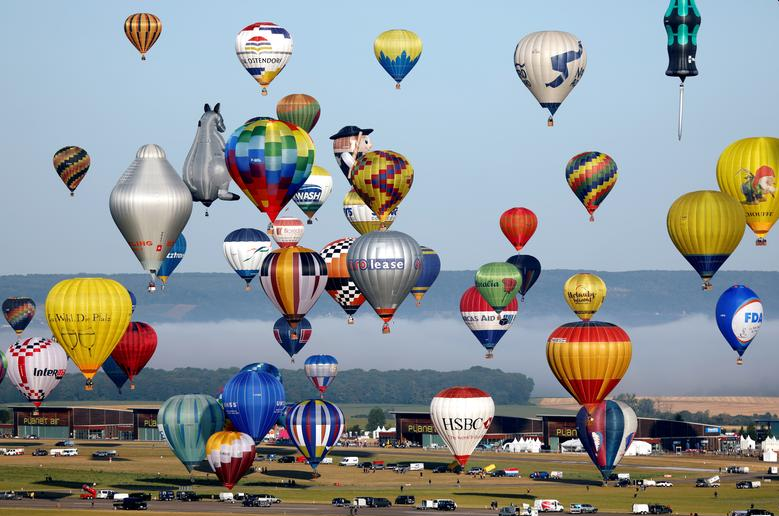 In the past, after landing, the distance of the balloon basket location from the designated target was measured. Thus, only one task could be performed per flight, and the integrity of the balloons was in danger if many balloons wanted to land at the same location. 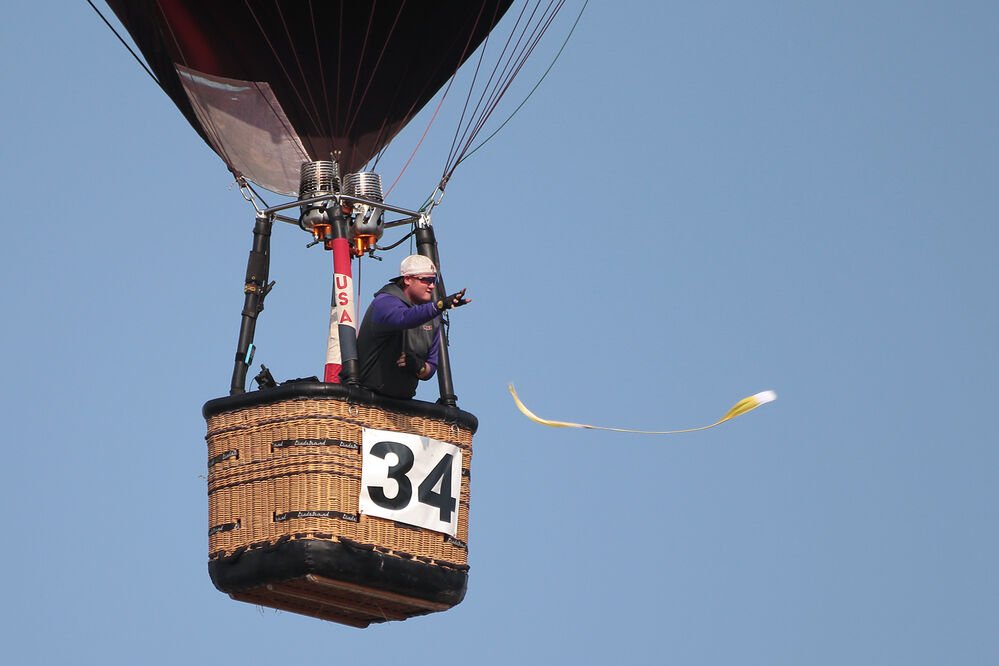 Today, competitors drop a marker at the target instead of landing. The marker is a 170 cm long, 10 cm wide strip with a weight of 70 g sewn into one end. In tournaments, members of the Target Team measure the distance of the marker from the target.
If you find one, don’t pick it up, don’t move it so they can evaluate the result!

Who decides what the task is?

In hot air balloon competitions, competitors have to perform various tasks to decide the order. The task to be performed during a flight is decided by the Event Director before take-off.

There are many aspects to consider when making a decision. How do you set tasks?

When the Event Director decides on the tasks many factors have to be considered. The most important of these are: weather, wind direction and strength, temperature, their expected changes. It is also very important to consider the geographical features of the landscape.

Before defining the task, the meteorologist of the event makes measurements. The measured data is first received by the Event Director, who decides on the tasks to be performed during the next flight. The measured meteorological data will then be provided to the competitors on the Task Sheet during the pre-flight briefing. Based on these, pilots are prepared for flight and competition.

What are the possible tasks?

During a flight, competitors are often assigned several consecutive tasks. Currently, the FAI Competition Handbook contains 20 different task types. Event Directors usually choose from these, it is not necessary to complete all types of tasks during a competition.

The 20 different tasks can be divided into 3 groups:

Scroll down and get to know the essence of the competition tasks! 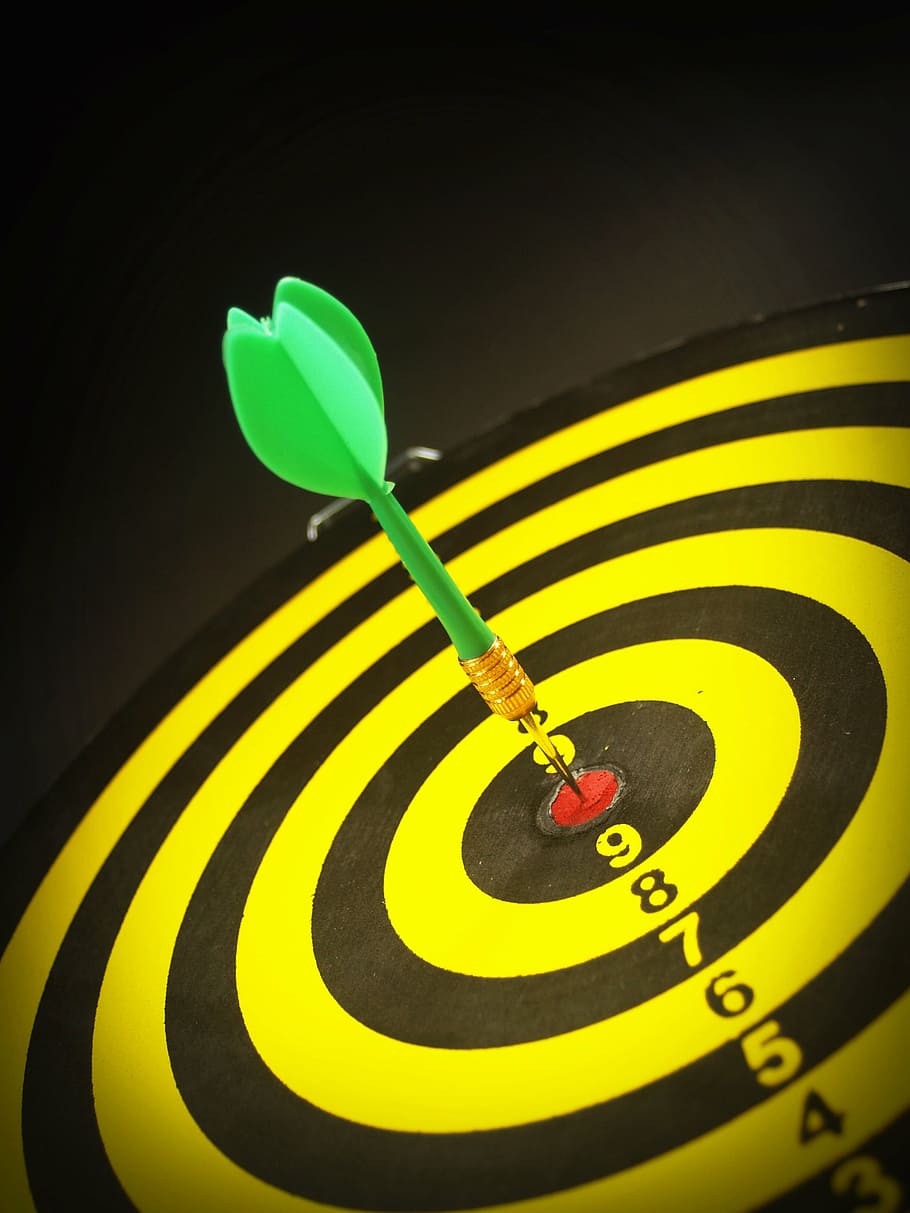 There are 8 different tasks in this group. After take off, pilots must fly to a designated target and drop markers on or near it.
It varies who chooses the location of the tension and the target.

Learn more about 8 tasks in this group

Competitors will attempt to throw a marker before take-off, as close to their own target as possible. This destination is usually an intersection, of course busy roads are not used. They can easily miss their own goal by reading the wrong map or assessing the wind conditions poorly. This task can well assess the different abilities of the competitors.

Competitors will attempt to place a marker as close as possible to the target set by the Event Director. The target is a large 5 x 1 m cross. It’s also an easy-to-understand and very spectacular task for the audience as groups of giant balloons approach a common target.

Competitors must place a marker on one of the targets set by the Event Director. The result is measured for the nearest goal. In this task, choosing the most advantageous goal and how to approach it is crucial.

The Event Director declares a target and all pilots try to approach it from the take-off location of their choice. The minimum and maximum distances from this area are required for this location. When choosing a take-off location, take into account whether you want to reach your destination low and slow or higher and faster. The strategy needs to be defined, but it needs to be considered that the wind direction may change. The audience can enjoy the task while waiting near the target.

Competitors must determine in flight what their next goal will be. The coordinates of their own chosen destination are written on the marker of the previous task, which of course they cannot change after dropping the marker. The difficulty of the task is that during the execution of a task, the next task must be prepared in such a way that the best results are achieved there after the onward flight. This task can well test the strategic ability of competitors.

The name of the task commemorates Gordon Benett, who lived in the early 20th century and was a big supporter of ballooning. Similar to the JDG task, a target and a marker measurement area (MMA) near it are designated. The target is then outside the MMA. Competitors must throw their marker inside the MMA. The competitor who drops the marker closest to the target gets the most points - if it is in the MMA. Thus, for this task, the drop is invalid if it is in the center of the target because it is outside the MMA.

Competitors must follow a “Hare Balloon” selected by the Event Director. The Hare balloon takes off 5-10 minutes early as its competitors. After landing, he places a crosshair next to his own basket. Competitors following the Hare balloon must drop markers on this target.

This is a variation of the Hare and Hound task. Pilots first approach the specified take-off location of the Hare balloon, then follow the rabbit balloon and throw it at the target it deployed. The name of the task comes from Richard Adams ’famous adventure novel Watership Down.

In addition to accurate targeting, time is also an important factor in these tasks. These 8 different tasks require even more attention and knowledge from the competitors.

What are this 8 tasks? Click here to find out more!

The balloons take off from a common launch area and drop a marker after a specified minimum flight time - as close to the take-off point as possible. In other words, competitors must stay closest to the starting point for the specified time.

Markers should be dropped into two different Marker Measurement Areas. The shorter distance between the two markers means more points.

The opposite of the Minimum Distance Double Drop task. Markers must be dropped into two different Marker Measurement Areas. The greatest distance between the two markers brings the most points.

The marker furthest from the take-off point must be dropped into the specified Marker Measurement Area.

A marker must be dropped as close as possible to the take-off point in the Marker Measurement Area. The competitor gets more points for the shorter flight route.

You have to go the furthest in the allotted time.

Race to an area - RTA

Use the balloon to reach a Marker Measurement Area as quickly as possible and then drop a marker there. The one with the fastest gets the most points. Like other races, it measures speed (elapsed time) and performance.

Similar to the JDG task, competitors place a marker on a target in a specified Marker Measurement Area, but have only a limited amount of time to do so. The competitor does not get a point if he drops the marker early or too late. 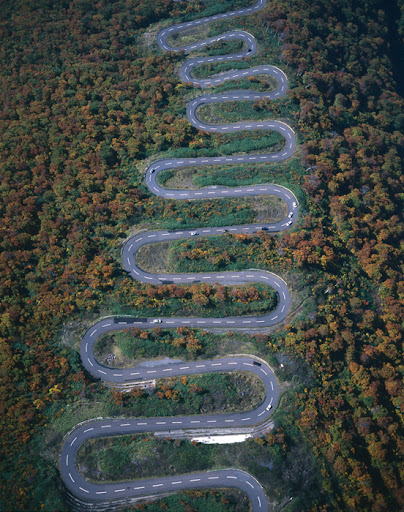 For such tasks, competitors maneuver, ascend, or descend between these levels. These tasks are among the most difficult.

What should competitors do for rerouting in flight tasks?

The task is for the balloons to find the biggest change in direction. A sharper angle means a better result, which is determined by competitors by dropping three markers.

A triangular shape must be marked with the flight. A triangle with a larger area is worth more points. As with the Elbow task, large changes of direction must be achieved here.

It is similar to the Elbow task, but a direction of travel is determined and the angle enclosed for it is measured. The duller the angle and the greater the change of direction is better. 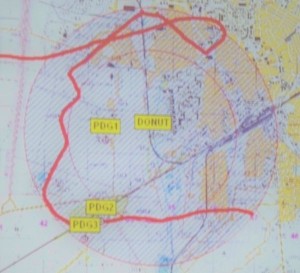 The longest route must be flown in a given assessment area. 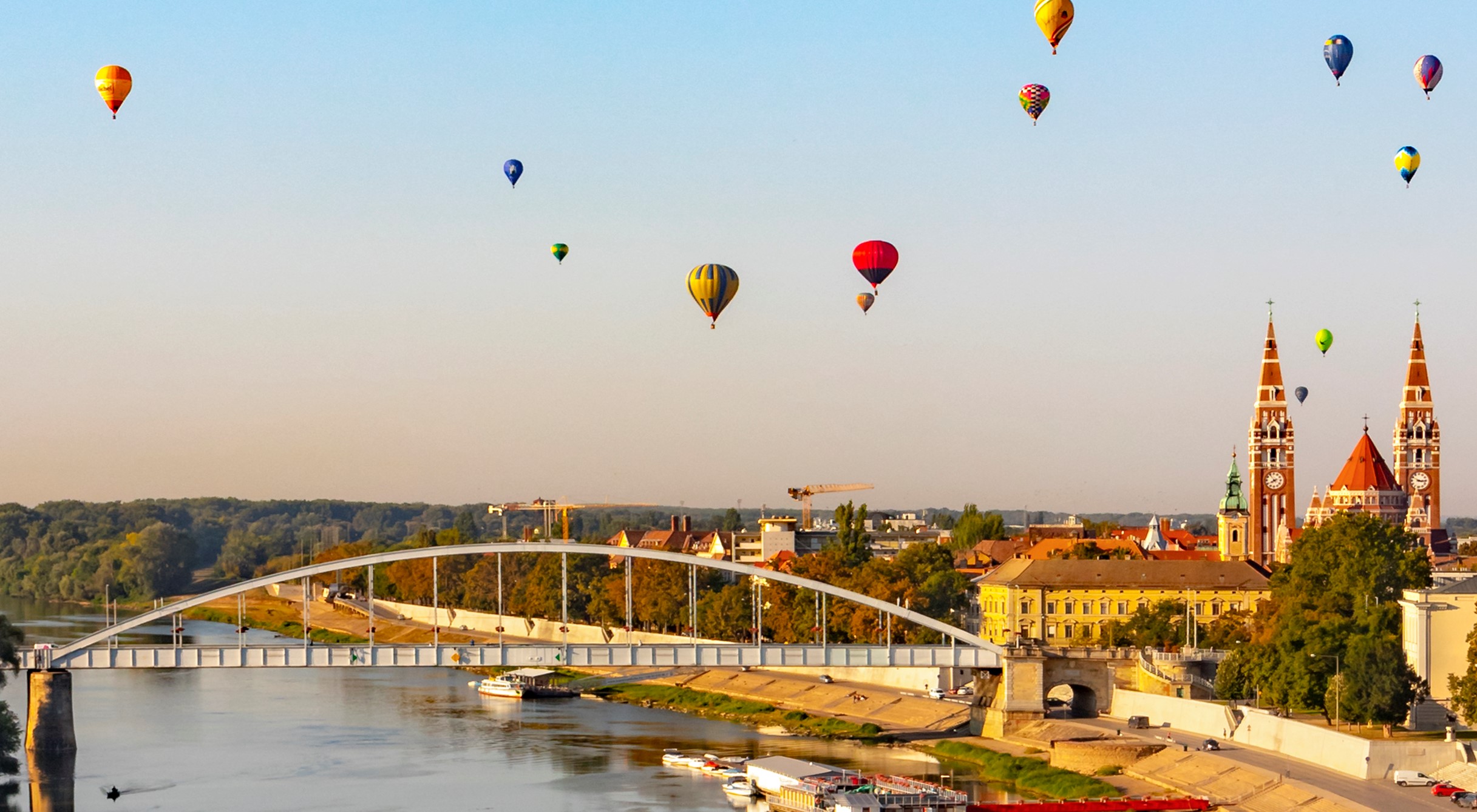